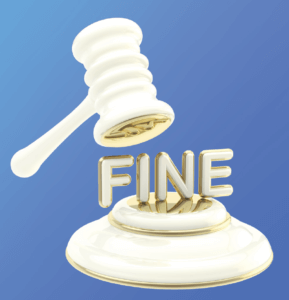 There have been cases of care home managers receiving fines for not following procedures regarding Legionella control in care homes. In this article, we cover the importance of Legionella control and prevention to avoid a fine and keep residents safe.

Legionella is a group of bacteria which is well known for causing legionellosis, a respiratory infection. The early symptoms of legionellosis include muscle aches, headache, tiredness, loss of appetite and coughing. These can be followed by high fever, chills and occasionally diarrhoea. When it causes pneumonia, it is known as Legionnaires’ disease. Unfortunately, Legionnaires’ disease can be serious, especially for hospital patients with a weak immune system.

The name for Legionnaires’ disease goes back to the bicentennial of the United States in 1976. Some 4000 members of the Pennsylvania State American Legion, a group of World War II veterans, had travelled to Philadelphia for the American Legion Convention. Ultimately, more than 200 of those legionnaires fell ill, while 34 others died after contracting a mysterious disease that would later be named after them.

Water is a source of pathogens such as L. pneumophila and Pseudomonas aeruginosa. Both of these are known to cause Legionnaires’ disease. Those over 50 years of age with weakened immune systems are particularly at risk of contracting these pathogens. Therefore, these bacteria are required to be controlled in healthcare premises in the UK, including care homes, to protect people living in the building.

Why Should Managers Be Aware Of Legionella In Care Homes?

The answer is simply to avoid deaths and being fined or prosecuted. There have been cases where managers were fined for non-compliance or taken to court after deaths occurred in premises under their management, including cases of care homes, as a result of Legionella contamination in the water system causing residents to contract Legionnaires’ disease and in some cases huge fines were issued (see the cases described below):

This example, from the Health and Safety Executive (HSE) website in January 2016 and relates to Reading Borough Council (RBC) which was fined following an investigation into the death of a pensioner from exposure to Legionella at The Willows, which is operated by the RBC.

Reading Magistrates’ Court heard how Mr Lewis Payne, a 95-year-old gentleman, arrived at The Willows, on 24 September 2012. He had previously been in hospital having suffered a broken leg. Therefore, he was attending The Willows to receive intermediate care before returning to his own home. However, during his stay he began feeling unwell, complaining of aches and pains including tightness of the chest, shortness of breath and difficulty in breathing.

On 16 October 2012 he was re-admitted to hospital and a sample proved positive for the presence of Legionella. He underwent treatment for Legionnaire’s disease, but died on 1 November 2012 from pneumonia related to Legionella. The prosecution said that robust control and management arrangements are needed to ensure the risk from Legionella is minimised. The court was told, prior to November 2012, RBC’s arrangements were not robust enough in a number of areas. The Legionella training for the key personnel at The Willows was significantly below the standard required. There were inadequate temperature checks and some of those done with respect to Thermostatic Mixer Valves (TMVs) were done incorrectly. Showers were not de-scaled and disinfected quarterly as required. Furthermore, flushing of little used outlets was reliant on one member of staff and there was no procedure for this to be done in the absence of that member of staff.

‘Brentwood care home legionnaires’ death: manager was too busy to do necessary training’

Kenneth Ibbetson, 86, was staying at the BUPA-run Hutton Village Care Home when he contracted the disease and died in June 2015. Mr Ibbetson had moved into the home on March 27, 2015. On June 20 he was admitted to Basildon Hospital, after feeling generally unwell. He was diagnosed with bronchopneumonia, an inflammation in the lungs, and was started on a programme of antibiotics. However, his condition deteriorated and on June 23 he died. The Health and Safety Executive found the bacteria in Mr Ibbetson’s ensuite bathroom in an investigation carried out after his death, the inquest heard.

The manager of a care home where the resident contracted Legionnaires’ disease and died did not do the necessary training because she was too busy. Miss Green said “sheer work load” meant she didn’t conduct water checks as regularly as she should have. She continued: “At one point the main office was in a bedroom and the files were on a bed. That’s how disruptive it got. It was a very busy six months.” Read more.

In recent years, the CQC has clamped down on care homes that have failed to put the necessary systems in place to control the Legionella bacteria. In early 2016, a residential and nursing care home in the Wirral was one of a number put in special measures, which was in part due to failing to monitor the risk of Legionella contamination in their water system. Read more

This example highlights that it is not just healthcare facilities that must comply. This is a recent case which made the national news and was reported by DWF in November 2016. G4s received a £1.8 million fine after failing to reduce the risk of Legionnaires’ disease from its water systems. The actual incident was in October 2013, when a G4S worker reportedly contracted Legionnaires’ disease. The council began prosecution proceedings and G4S pleaded guilty to two charges under the Health and Safety at Work etc. Act 1974 in June.

The judge at Chelmsford Crown Court sentenced G4S to pay £1.8 million in fines and court costs of £34,000 for a lack of safeguards or adequate systems. This was despite the fact that Harlow Council investigated and environmental health officers were unable to prove the worker had contracted the disease from the site. This is an example of the huge fines available to sentencing judges in the event of health and safety breaches by organizations. This signals a shift from outcome-focused to risk-focused sentencing, observed the report.

How can Care Homes be Legionella compliant?

There is a Legionnaires’ disease technical guidance document for duty holders called Health and Safety Guidance (HSG274). The guidance which comes in 3 parts, gives practical advice on:

1. Carry out a thorough assessment of risks of exposure to Legionella. This should be done by a qualified person.
2. Get advice from the assessor on measures to be compliant with the COSHH regulations.
3. Carry out regular inspections and report to the CQC if you find Legionella. This is a requirement under Regulation 18 of the Health and Social Care Act.
4. Keep records for at least five years.

The HTM guidance also refers to alternative technologies such as the use of copper and silver ionisation. However, it includes them as complementary controls rather than as the primary control method. It specifically says: “Because of the complexity of hot and cold water distribution systems and the difficulty of maintaining a temperature control regime in some healthcare facilities, this guidance suggests that additional chemical, physical and other water control methods that have been shown to be capable of controlling microbial colonisation and growth may also be considered.”

Although relatively new, copper and silver ionisation (CSI) is widely in the USA, Europe and the UK, including care homes. I have chosen to discuss the use of CSI in this article because after carrying a research of the main methods for controlling Legionella and other dangerous pathogens in man-made water systems (Barbosa & Thompson 2016). Furthermore, I concluded that this is a robust and effective system as well as being a system which does not pose danger to water users, pipework or the environment.

Figure 1 below shows the results for three care homes in the south of England that are under a not-for-profit provider of housing and care for older people. All three homes have been using the CSI system for the past few years.

As shown in the graphs, low levels (100-300 cfu/L) and one case of 1700 cfu/L of L. non-pneumophila occurred in Care Home 1 in a few occasions between 2013 and 2014. This was due to irregular, infrequent flushing of the outlets. Regular flushing is necessary to make sure copper and silver circulates within the water system. Consequently, this achieves Legionella control and avoids the formation of biofilm. The outlet with the higher count of 1700 cfu had to have biofilm removed from the rubber lined hose. By keeping copper and silver levels where it should be 0.02 mg/L silver and 0.200 mg/L copper and following maintenance procedures, including flushing of low use outlets, Legionella has been under control at Care Home 1 since the end of August 2014. 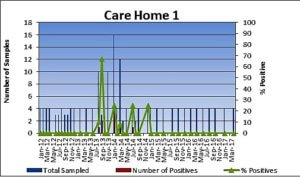 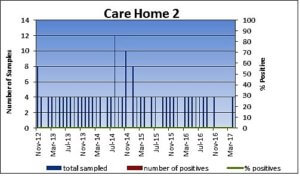 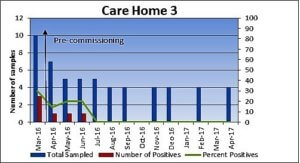 No Legionella has ever occurred in Care Home 2 since installation of the system in 2012. This shows that the CSI system and the regular maintenance, has kept Legionella out of the water in the home.

Care Home 3 had three positives for L. non-pneumophila. However, after the commissioning of the Orca copper and silver ionisation system in March 2016, there is a steady decrease in L.non-pneumophila. The care home has been Legionella-free for over a year now.

If you would like to find out more about controlling Legionella in care homes, contact ProEconomy today.